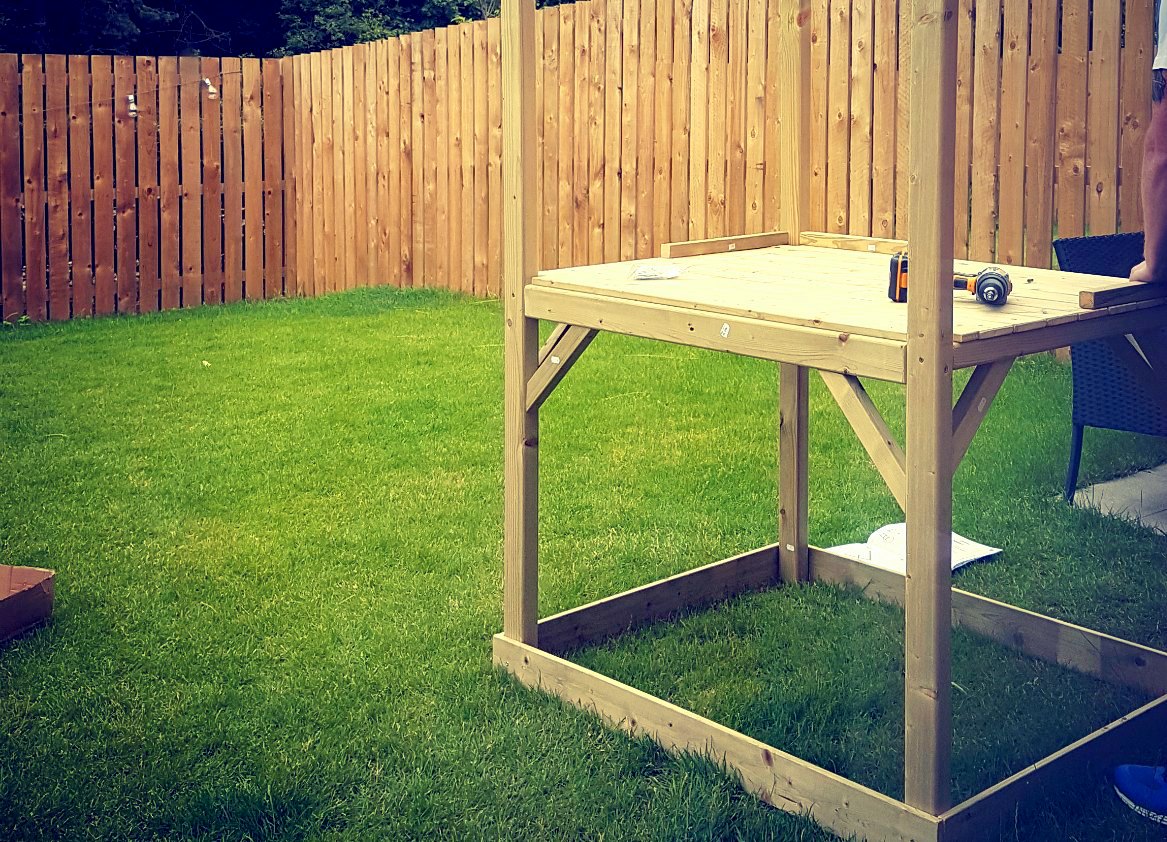 Moving in to a new build a year and a half ago meant that we could do up our home to be exactly what we wanted. It also meant a lot of work and even after being here for over a year we are still only about 30% there..if that. The one thing however, that is really niggling at me is the garden. When we moved in, our new garden was already all turfed and it looked beautiful, but in reality it was a bog until end of summer last year. We wanted to get straight on with making it a nice place for our son and the two pups to play out in and for us to enjoy too.

Last year we began doing bits and pieces and we have had some successes and some fails. We still have a very very long way to go before our garden looks how we want but we have plenty of time to get there. There are definitely things I would change that we have done but there are some things I am particularly proud of. We are learning as we go and definitely learning from our mistakes. We still need to save up for things too. 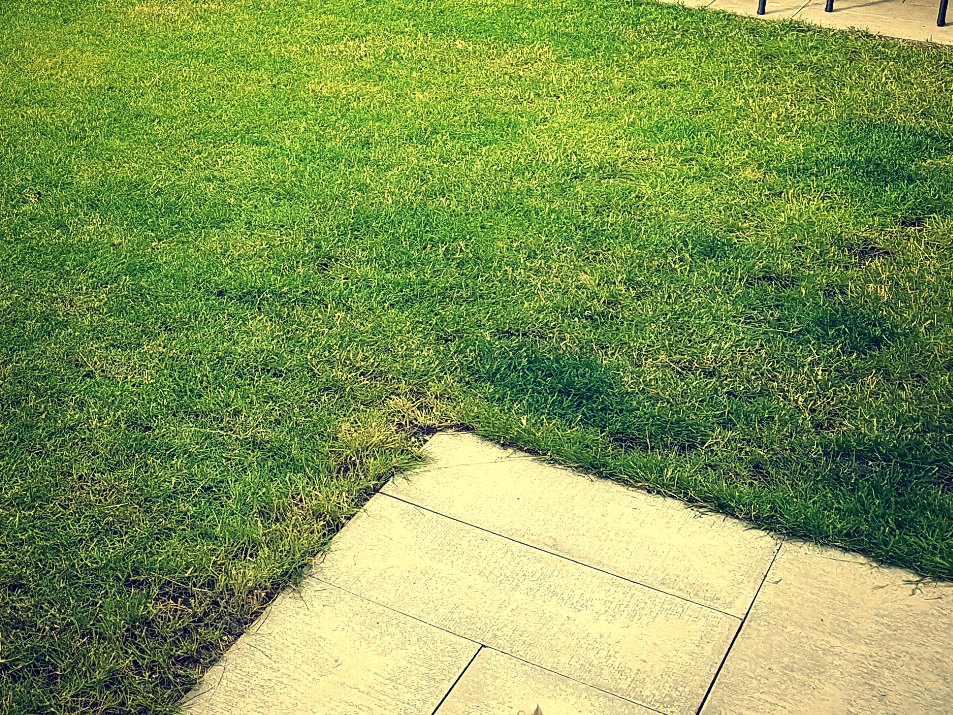 One of the first things we did was put down some more flag stones so we could have a shed. We needed somewhere to put all of our junk and garden stuff that we have accumulated over the years. We bought the wrong colour stones but we were in a rush so just put them down (with thanks to my uncle). They don’t look amazing but they did the job and it is something we will definitely be sorting properly in the future. 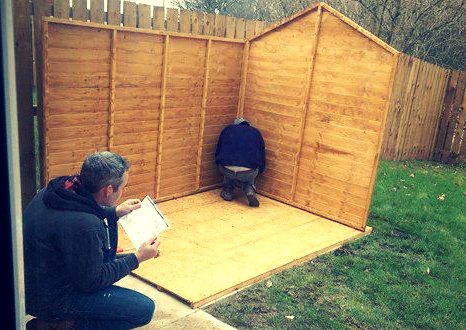 The shed we bought wasn’t all built when it arrived but it had the 4 sides, base and roof pieces all assembled ready to attach to one another. At least it wasn’t just pieces of wood that we had to build up from nothing. It did still take us quite a bit of time to be able to put it all together but we did actually do a pretty good job. It wasn’t too difficult and once built I decided to paint it to make it look nicer. I was very happy with my painting job but not with all the paint that had ended up on the patio and is now permanently there. 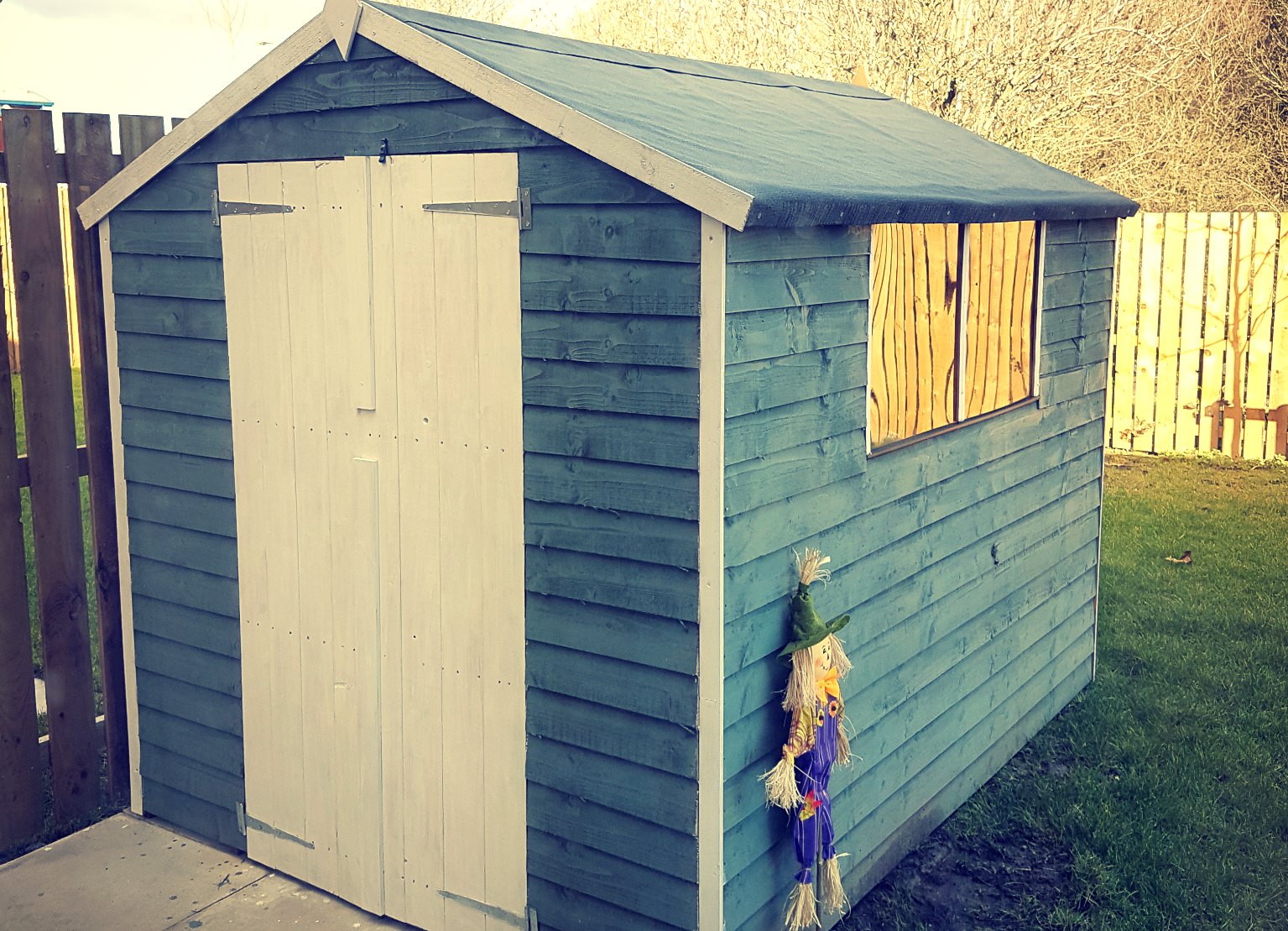 The shed looked great once finished and you definitely couldn’t tell we had never put one together before! I was rather proud of my little shed and it was nice to finally have somewhere to dump all the junk and stuff we wanted to hide from the world! The only thing that I thought wasn’t great about the shed was the plastic windows. The material is so thin that they just bend and don’t stay in place. You can tell they aren’t the best quality but they are just for a shed so I suppose they don’t need to be. It is easy enough to order something else that is of a better quality if needed and an option would be to try using perspex sheet. So it would be an easy fix if the current windows didn’t last long. 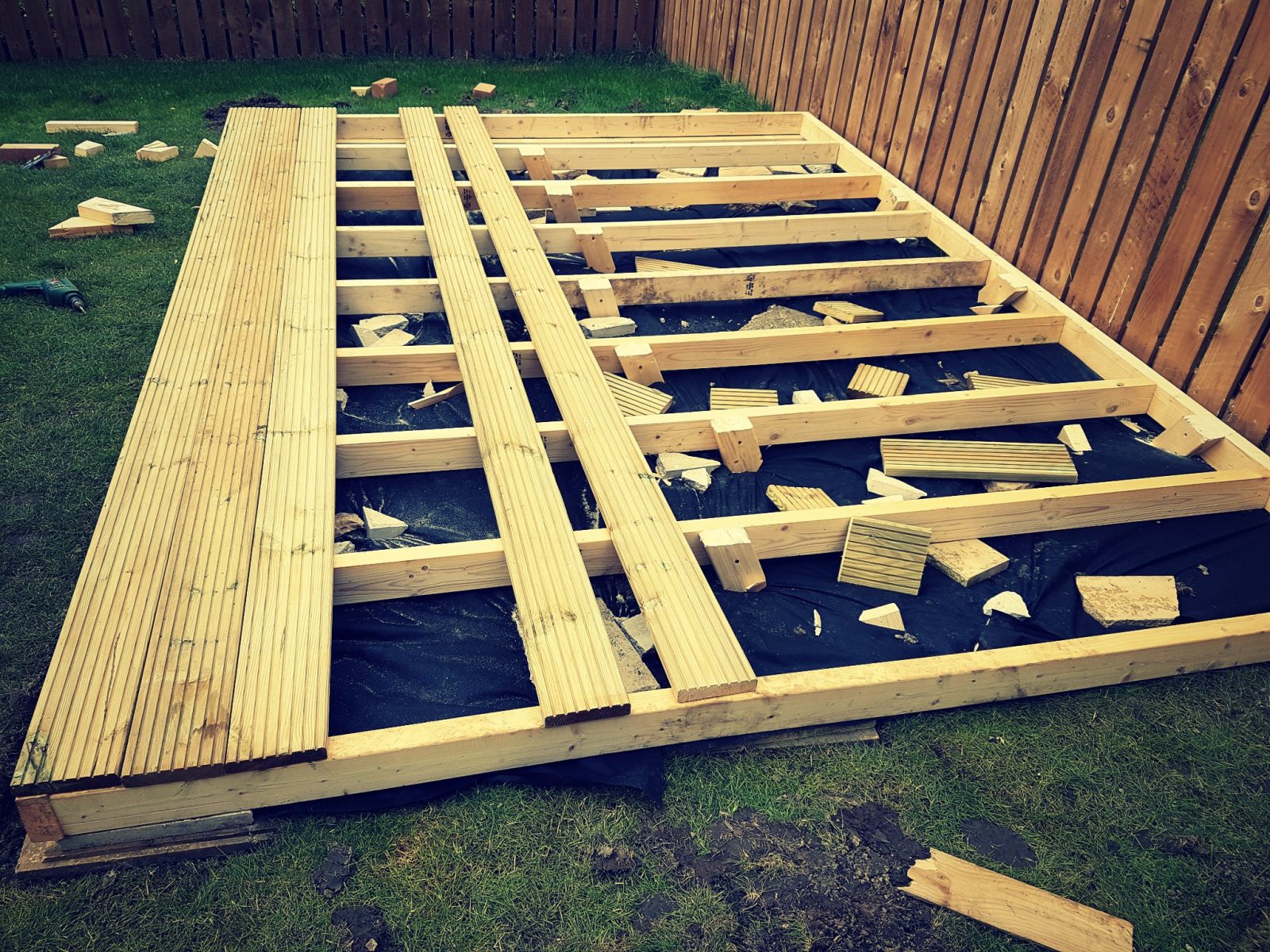 The next thing we wanted to do in the garden was create somewhere nice for us to sit. We decided to build a deck and try and do this as cost effective as possible. I found someone selling some decking boards that they had spare on Gumtree for £45 and this gave us quite a good sized deck. My dad was the genius behind building this as he worked out what we needed and how we should do it. My dad does deserve all the credit to be honest as he did most of the work for us! 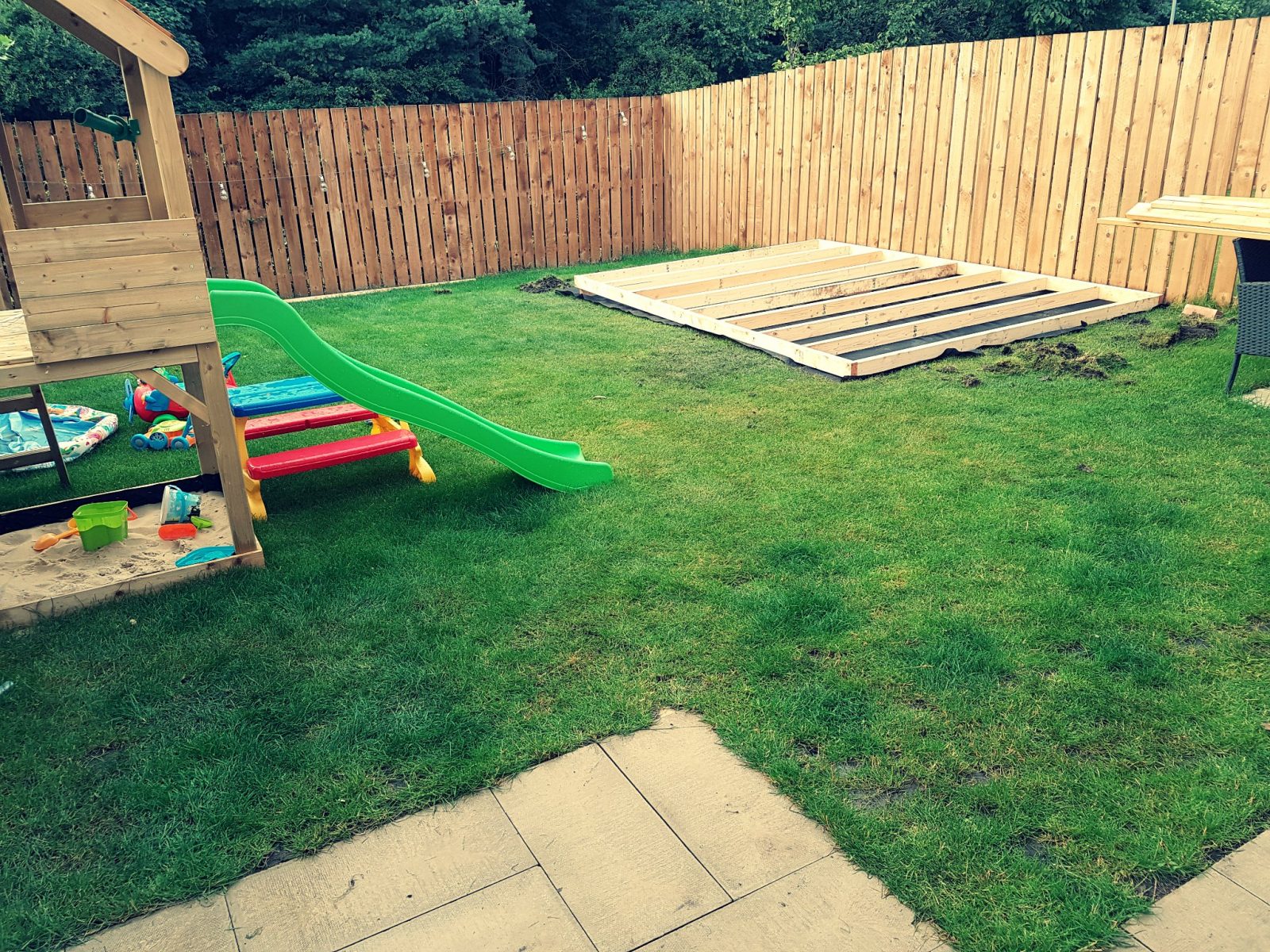 The deck took 2 days to do but was easier than I had originally thought. The most difficult thing was actually getting the levels right and positioning it all correctly. Aside from that it was a case of creating a base with the wooden beams we had bought and then fixing the decking boards on top. We did have to obviously cut things to size too which was quite time consuming but wasn’t too difficult. The other thing we did was make sure the base was very sturdy and not wobbly by creating some anchors out of wood and hammering them in to the ground and screwing them to the base. It worked so well and there isn’t even the tiniest bit of movement or springiness because of this. 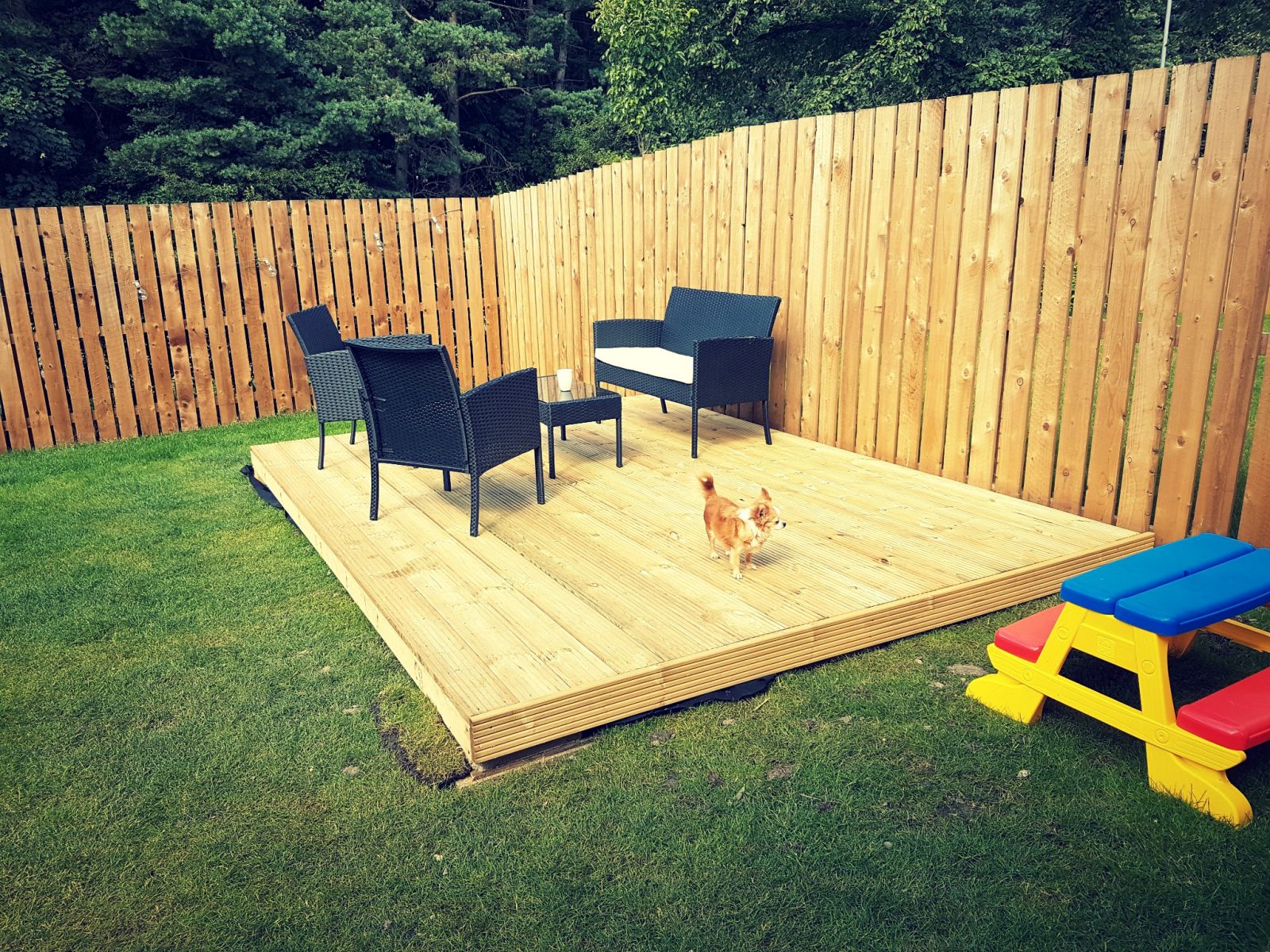 We were very happy with our deck and we had spent probably around or just under £100. We will be building another bit of deck soon but at least we have something for now and it is quite a good size. We have a few little bits to finish tidying up and we want to buy some kind of privacy screening to go on our fence so that when we are sat on the deck people can’t see in. Apart from that we have already accomplished quite a bit in the garden. 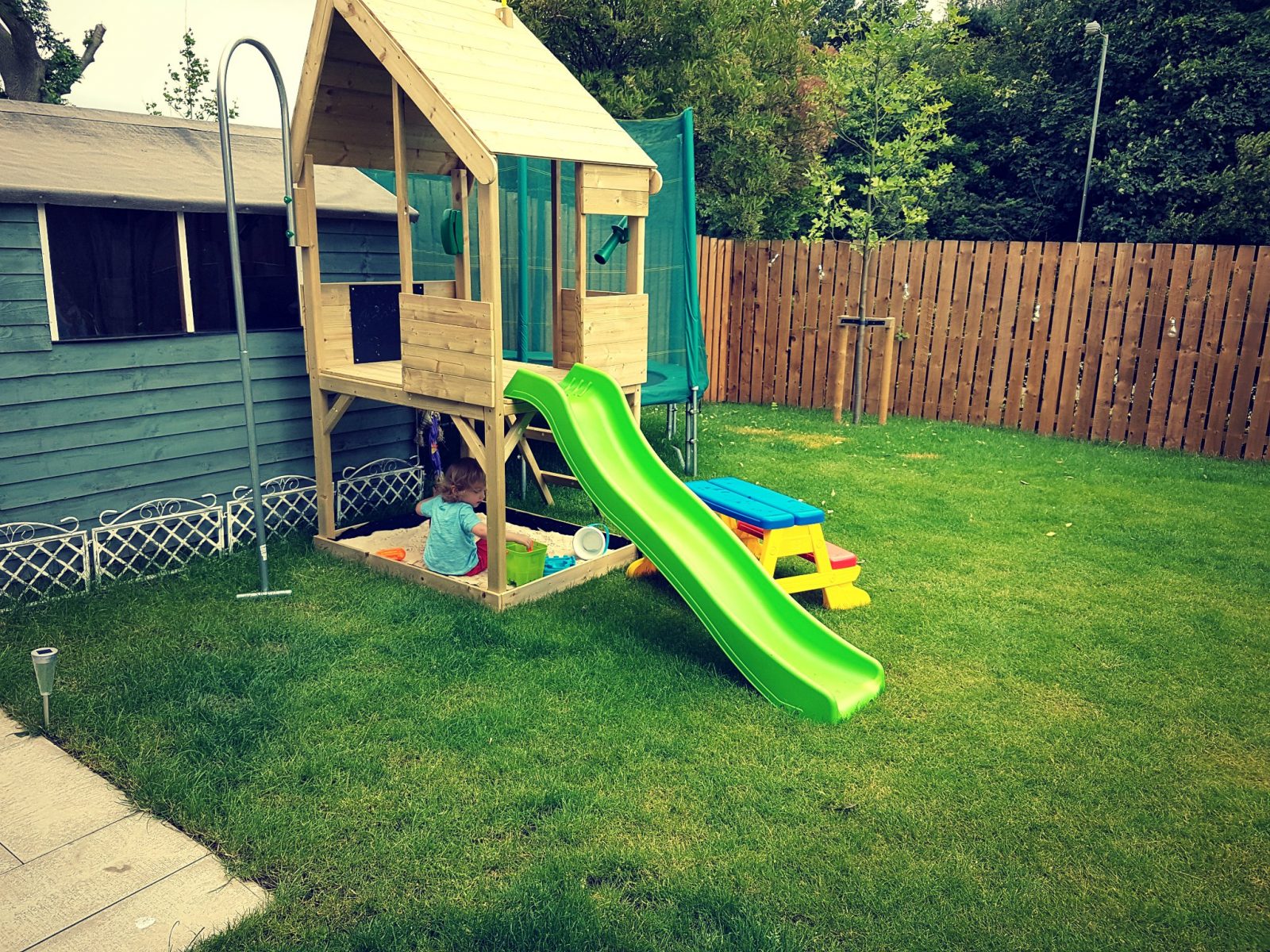 The other thing that we did add in the garden was for our little guy. We got him a little play house with a slide, fireman’s pole and sandpit and that was probably the most difficult thing we had to fix together. We did actually enlist some help and did pay someone in the end to help us out a bit with this as it was a nightmare. Setting up the trampoline in the garden was already testing enough and this thing just came in millions of pieces. I definitely think building a climbing frame/play house is a very good test for your relationship with your other half!

We still have a very long way to go in our garden and we have some things that turned out and look amazing and some things that are just not so great. Definitely the patio in our back garden is the worst and the damage to the grass from things like a trampoline and a playhouse being there are bad. But it’s so much fun having something that is ours to actually make mistakes with. That we can regularly improve and add to and something we can do together. I am looking forward to adding plants and things in the garden to really make it beautiful.  We will get there one day and I can’t wait to see the changes we make over the years. 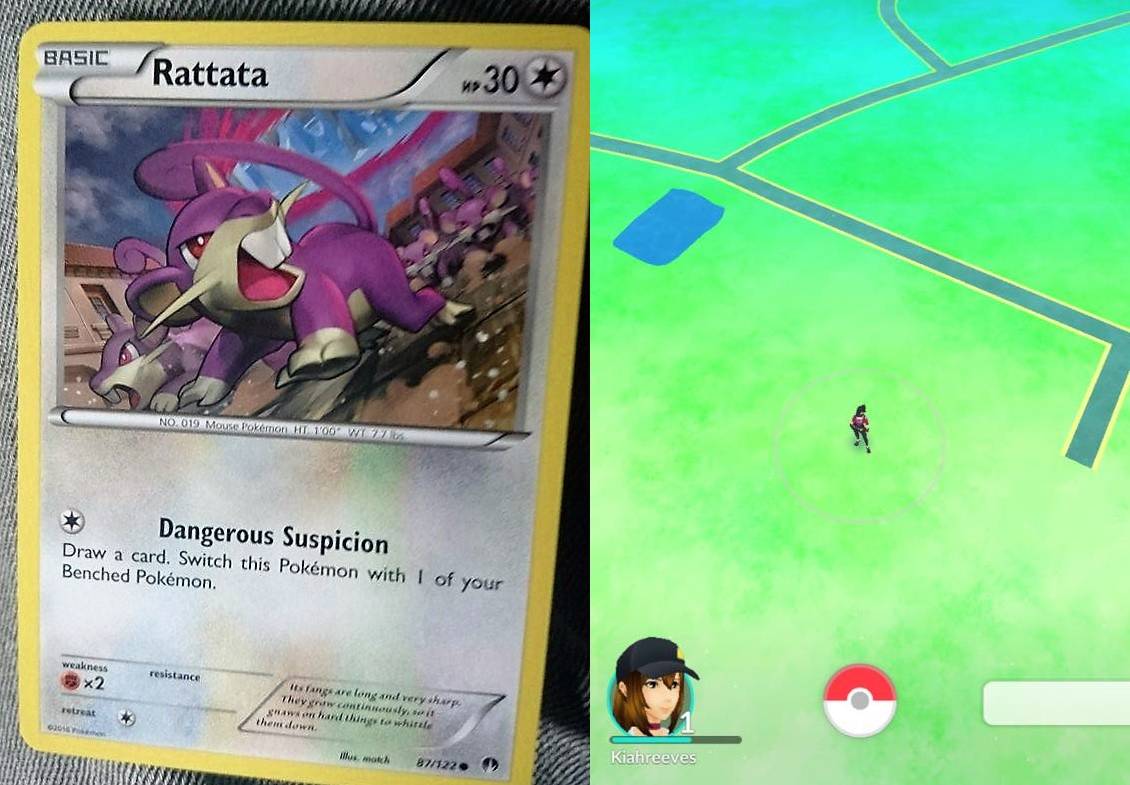 PokemonGO – Are You Sitting on a GO-ld Mine?

I Think I Am Now a Pizza Hut Fan!